A Selection of Artworks From the 1980s 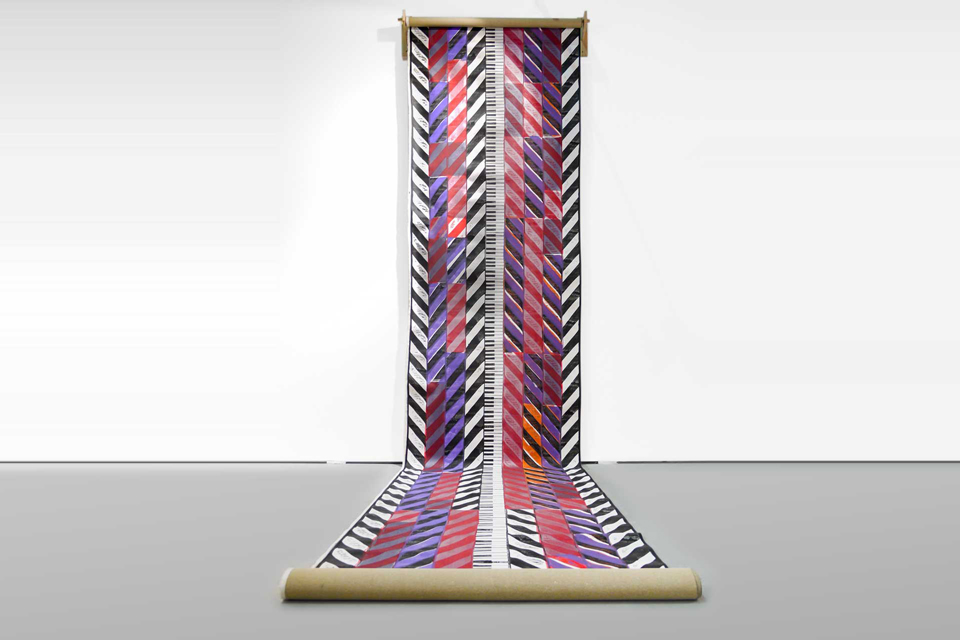 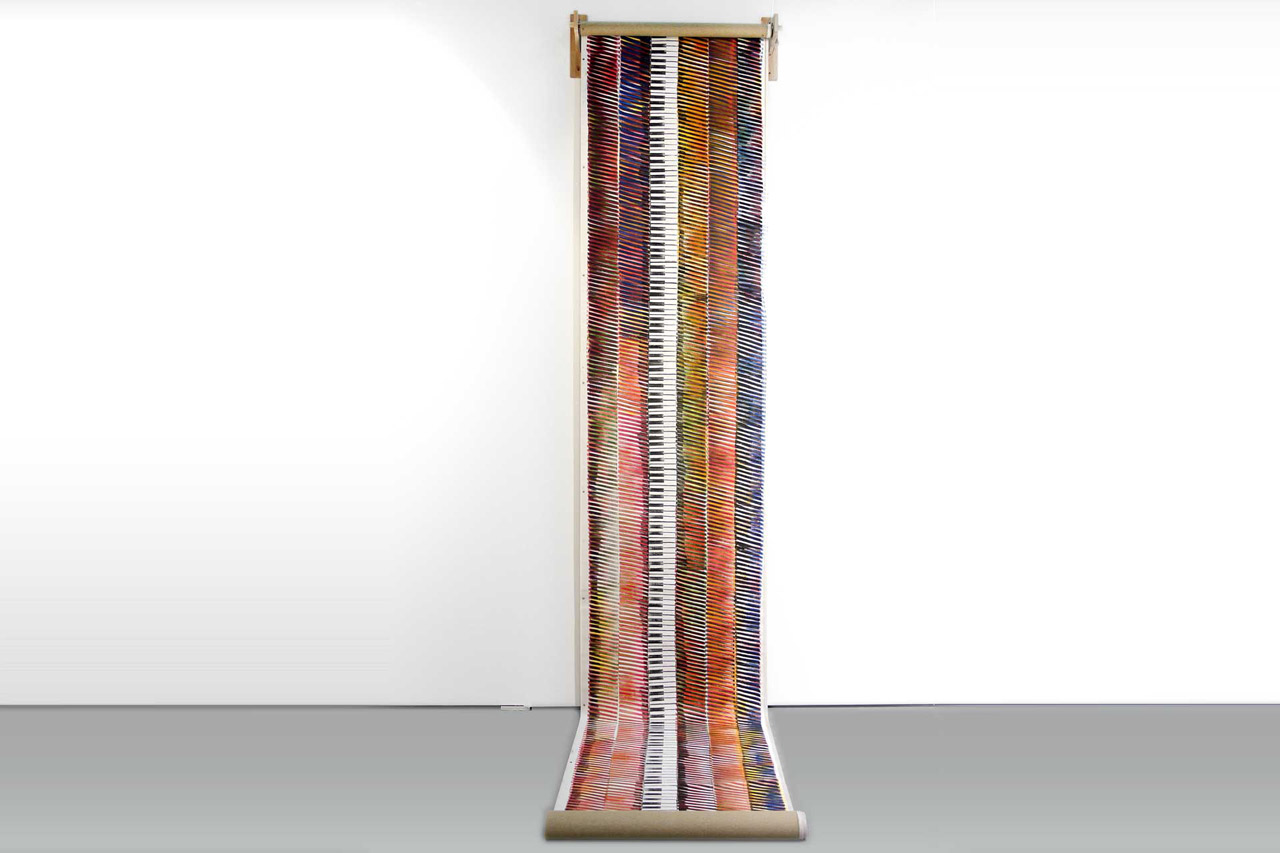 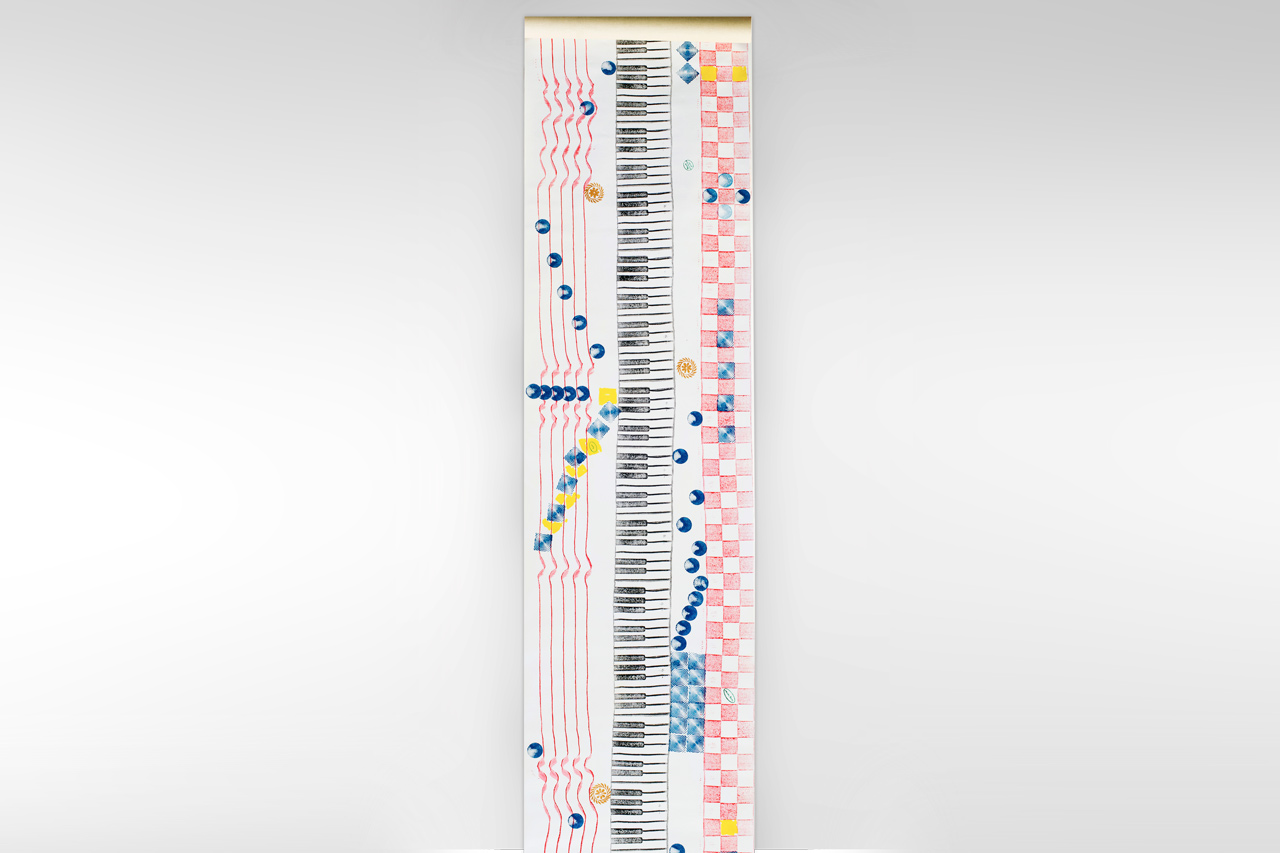 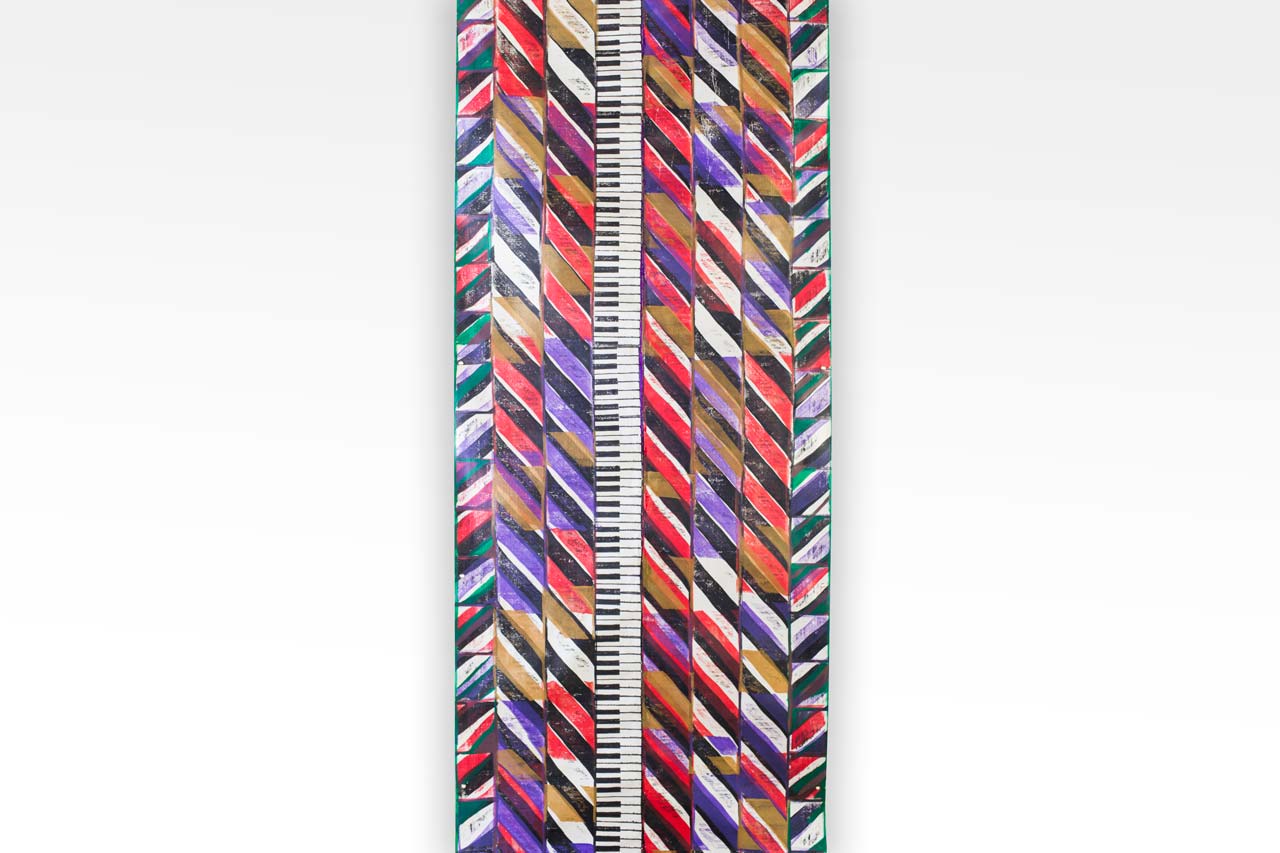 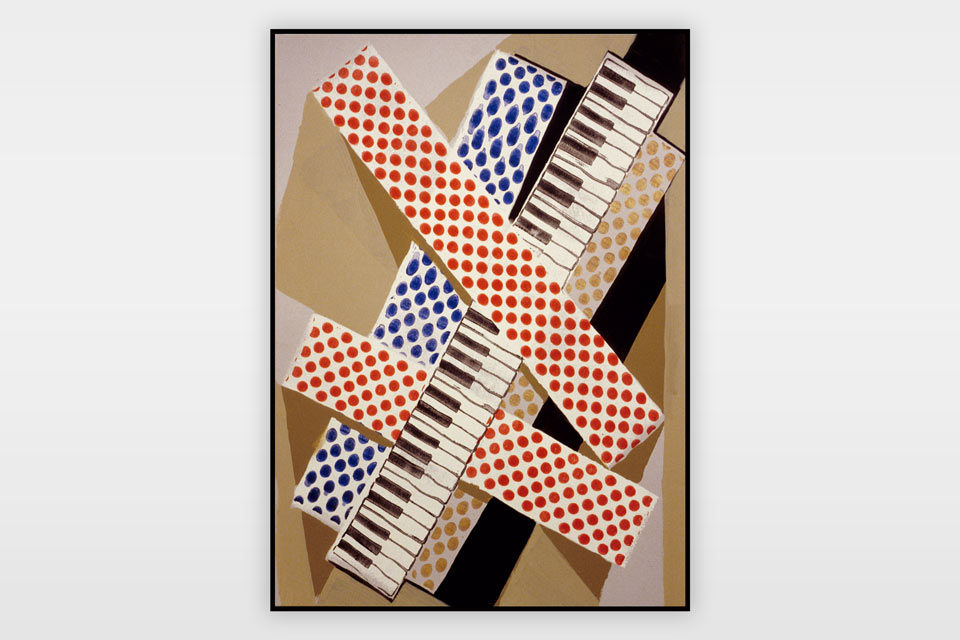 Jazz at the Soft-Geometry Studio 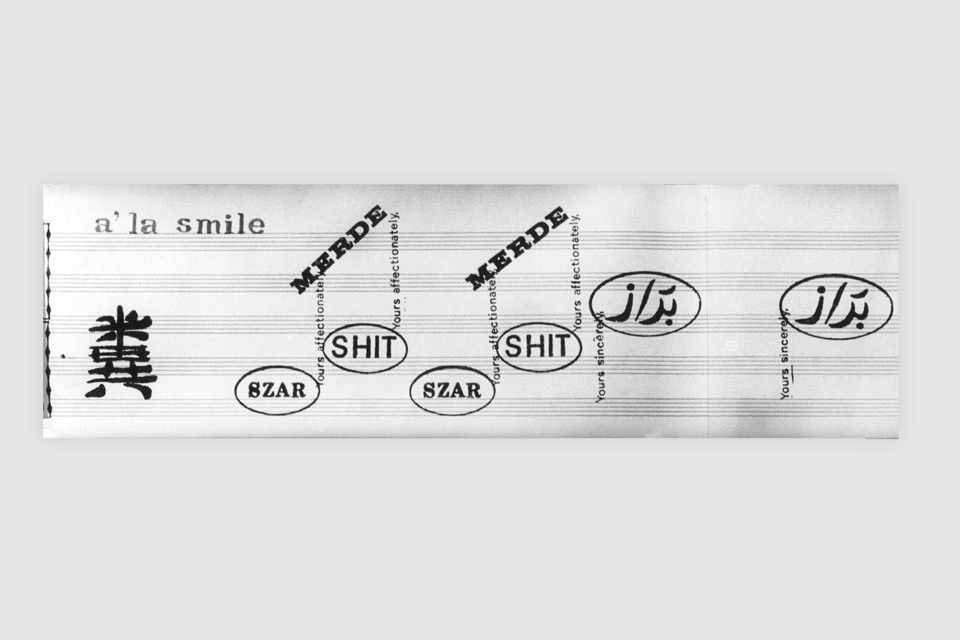 The Pictures from the Poll (String Pictures)

In the present publication I am making the reader acquainted with my artistic works created in the three-year period between 1984 and 1986. I call them works from Poll, because the studio where they came into existence is situated in a district of Cologne called Poll. Here I would like to add that I do not feel the word ’painting’ appropriate to describe my works. I prefer using the more general word ’picture’. The reason for this is that you usually mean pictures made with a brush when you mention paintings. The works created in the studio in Poll were mainly made with rubber rollers that are suitable for printing ornamental patterns of optional length. Similar tools are used by decorators or workshops producing colour textiles. Now I would like to outline how these tools became a ‘painter’s brush’ serving artistic purposes in my studio.

I came to Germany from Hungary in 1970. Since as an art historian I had been dealing with contemporary art, after arriving I wanted to settle in the centre of avantgarde, either Düsseldorf or Cologne. Eventually, I got a job as a teacher in Cologne. Besides teaching I regularly worked as an artist, I made conceptual works for which I applied graphic genres as well as photography and filming. These works were presented at the WDR festivals (Oeldorf, 1972-74) organised by Stockhausen circle, and exhibited in In-Out-Center gallery in Amsterdam by Ulises Carrión. In 1973 I started to experiment with the artistic use of rubber stamping also known from office work under the influence of my Czech friend, Jiri H. Kocman. Right in the following year the director of a Düsseldorf Fluxus gallery, Michael Leaman held an exhibition of my stamp works. He encouraged me to go on making rubber stamp art series and to publish them in the form of portfolios. In the ‘70s rubber stamp art became an important medium for me.

At that time this technique was discovered by the most diverse alternative trends such as Mail Art, but the works made by them kept their palm size, their miniature format appropriate for rubber stamps. As for me, at the beginning of the ‘80s I started thinking about using this popular technique in ‘grande art’ and expand it to a ’monumental’ genre. Until then I had used the art rooms of the school asan occasional studio, but now it was time to have an own atelier where I could work continuously.

It was 1983 and the cultural department of Cologne City decided to let the rooms of empty plants and offices to artists as studios. I also applied for a room and I attached a letter to my application as anemphasis.

Some time before I got a letter from the American president Ronald Reagen in praise of my work. Previously I had ordered rubber stamps for the word ‘secret’ in eight languages, and I printed ‘invisible’ stamps with white acryl paint on white paper (one word per page). I published it in the form of a booklet and I sent a copy to the heads of state of countries where eight languages are spoken. This action was a sort of performance. Two of them thanked for the booklet, the king of Spain and the American president. The applications were considered by Doctor Gellner, one of the chief administrative officers of the city. Although he thought that the reply I had received from Reagen was sheer chance, he said I usually had ’lucky chances’. Soon I got a studio from the city.

At that time it was the former engine parts factory under 60, Poller Kirchweg to let to artists. The offices facing the street were distributed among painters, the large assembly hall situated in the factory yard was offered to sculptors. The whole complex was to be demolished but until then artists could use its empty rooms. I moved in the upstairs rooms at the beginning of 1984, and immediately I tried to make large rubber stamp works on big-sized sheets. The tiny stamps could almost not be seen on them. A better solution was to experiment with cylindrical rubber rollers that decorators used in Hungary to paint the walls of flats with rolled patterns similar to those in wall paper. I bought some such paint rollers, and since the patterns of these rubber rollers were carved by hand, it seemed possible to order several pieces according to my design from the craftsmen in Budapest. I needed quite simple geometric patterns as well as one roller with a powerful, almost unforgettable repeated motif. I realised that one octave from the keyboard of a piano can go onto the surface of a roller and it became my leitmotif. I was able to use the studio and the rubber rollers in it for three years. The building standing on Poller Kirchweg had to be emptied at the beginning of 1987. Today there are apprentice workshops of a vocational school on the site.

Since the pattern created with the help of rubber stamp rollers is in fact a onedimension graphic work, that is, the dominant feature of the works printed with the rollers is their length, which can theoretically be infinite, I soon realised that the most natural format of the pictures made with this technique is the string. I wanted these paintings to be as long as possible. However, I did not make pictures more than ten metres long with the rubber stamp rollers, mainly because the canvas and drawing paper available in the form of rolls in art stationery shops are at the longest ten metres.

In the same way, the different quality wall paper rolls that are suitable for printing string pictures on their white back side are also ten metres long. Naturally, I was constantly attempting to make pictures close to the usual picture format with my rollers. Nevertheless, I was paid the biggest sum for a work of art of ‘absurd format’, a ten-metre-long string picture, which was bought by a museum.

It is possible to find a relationship between the one-dimension string pictures made in my Poll studio and the pieces of minimal music becoming popular in the 1980s. In fact I have had some visitors who said my string pictures reminded them of György Ligeti’s ‘Continuum’ or of the micro-structure of ‘acoustic carpets’ often heard in modern music. Probably, it is not only for the repeated keyboard motif on them that these paintings have music associations for an observer but they also make you feel that they were born in a decade when the format and genre of closed panels definitely brokeup and disintegrated into the most diverse components experimenting with space and time. The dimension of music, time seems to belong to these components as well.

Original text by Géza Perneczky, in: The Pictures from the Poll, Soft Geometry, Cologne 2011, Page 3-5.